This is Day 10 of our spotlight series on 15 Professional Pet Sitters Share Their Favorite ‘Tales’. 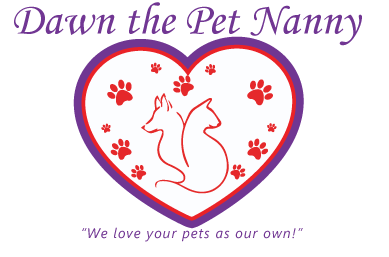 If there is one thing I have learned about running my own business, it’s the power in trusting your gut.

Call it intuition, or a feeling, but 99 times out of 99 times, your gut feeling to a choice or decision you need to make will be the absolute correct one.

Too often we get caught up in second guessing what we truly know we should be doing.

Dawn Higgins of Dawn the Pet Nanny LLC in Horsham, PA knows about this first hand.

As you’ll see, something inside her was telling her to make a certain decision, and someone’s life was saved because of it.

Professional pet sitters are extraordinary people who go above and beyond for every living creature in their local community.

Hiring a qualified and trained professional to care for your pet while you are away can be the best decision you can make.

Listen To What Your Gut Tells You.

I was out walking a regular clients dog, named Blue. When we started our walk, I had the thought of taking Blue to the local community park which is just a short distance away.

For some reason, at the last minute I changed my mind and we changed directions. It’s a good thing I did!

We headed off for our walk on what seemed to be like any other day.

We took a nice long stroll around some of the neighborhood streets. Passed a few dogs behind fences that we normally see and went on our way. Blue had already done his “business” and we started to head back to his house.

Since I had some extra time on my hands, I decided to make one extra loop around Blue’s block which I never do!

We were heading up the block and I hear what sounds to be a little dog barking his head off. Next thing I know out from a bush comes a little Yorkshire Terrier.

He runs past us and right into the road. Of course my first reaction is to get him for fear he will be hit by a car! He decides he wants no part of being captured and decides to play a cat and mouse game of catch me if you can.

All the while Blue thinks it is time to play and is leaping and jumping all over the place. I realize that the dog belongs to a neighbor who lives behind Blue.

I begin walking to the door and the dog takes off and runs into the fenced in back yard. I notice that because he is so tiny, he can fit right between the gate and the fence post. However, he is now in the back yard and is staying there.

I begin walking away with Blue in tow heading back to his house. I have this nagging feeling though about leaving the dog as he could slip right back out into the street.

I look over my shoulder and there he is in the front yard. I turn around and go to the front door. I ring the door bell.

I knock again but this time with my fist. I thought I saw someone’s shadow inside and maybe they don’t hear me. Then the door opens and I get the shock of my life.

The elderly man standing in front of me is covered in blood. If I didn’t know any better, I would have thought a crime had just taken place. I say “Sir” what happened to you.

Forgetting my point of being there is the loose dog running around! The first words out of his mouth are “I’m going to catch hell from my kids”. I said to him I’m sure your kids will just be happy to have you here with them.

I ask him what happened and why he is bleeding. He says he fell on the concrete. Now it is starting to make sense. I ask him if he can walk and he says he can so I tell him to step out onto the porch and sit in the chair.

I ask if anyone is home to help him. He says his “elderly wife” is upstairs but she won’t understand and will be upset. As he sits down he says he has a bit of a scratch on his head. I know from experience that head wounds bleed an awful lot so I really don’t know what I’m dealing with here.

That is until he moves the piece of paper towel and I see that he has a very large and what appears to be deep gash on his forehead and blood is coming out everywhere! Then I see his arms. The poor man ripped a lot of skin off of both arms when he fell and they were bleeding profusely as well.

As I’m waiting for the ambulance, I ask the man if I can enter his house with Blue to get some paper towels for his head. It looked like a crime scene inside. Blood everywhere! At this point, I was able to get his dog inside so at least he was safe!

I come outside and help clean him up. We are talking and I ask if he is taking medication. He’s on blood thinners. That explains the torrent of blood everywhere. I mean I know that he has a severe wound but the amount of blood was crazy.

The police and ambulance show up shortly after I help him get his face a little cleaned up. He is completely surprised that an ambulance would come to his home for a simple scratch on his head! I tell him that scratch might need a few stitches.

He is completely lucid and trying to tell the policeman that his keys are on the table and he will drive himself to the hospital. Thankfully they were having no part of that! The policeman asks him to spell his name.

He asks him again because he doesn’t understand his last name. The third time the man made a joke and said “don’t you know Paul McCartney”, that’s my last name! He held his sense of humor throughout the ordeal.

The paramedics wrap the man’s head up almost to the point of looking like a mummy. Then both arms are wrapped up. He starts waiving saying he’s never seen so many bandages in his life.

I tell him he is so lucky he can see those bandages! He asks the paramedic if he can walk to the stretcher. They allow him but with help. He gets on the stretcher and as he is being wheeled to the ambulance he waves frantically and yells out “Dawn, My Angel, thank you for saving me”!

I tell him that I will be back next week to check on him while I’m out for my walk.

Now that I’ve had time to contemplate todays’ events, I wonder, what would have became of this man had I not shown up?

Read More: See all of the stories in our ongoing series of 15 Professional Pet Sitter Share Their Favorite ‘Tales’ From the Past Year!

While we are hired first to care for a client’s fur baby, more often than not, the friendships, bonds, and relationships we make with their human counterpart can have a profound impact on our lives.

Everything happens for a reason.

If we were brought into a person’s life via our calling as a pet professional, all the better.

Tell us the impact you have had on the human client.

As you have certainly seen in the recent past, many directory-style profile websites have popped…

At times, your pet sitting business card will be the first impression a potential client…

Your Dog Is Fat: The Secret To Confronting A Client With Uncomfortable News

Here's a wonderful question I received from a pet sitter. It addresses something we all…