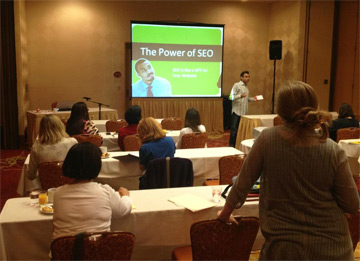 Joshua Cary speaking on the topic of SEO at the first ever PetSittingOlogy Live Event in Las Vegas – 2012.

It was a seemingly innocent invite.

Bella Vasta was asked to speak at a poop scooping conference in Las Vegas and then decided to asked me if I wanted to join her there for some fun and networking opportunity.

It made sense for me to say yes, even just for the potential to meet other pet professionals in person, but I felt like I wanted to make even more of the invite.

I began to think that if I was going to be in Vegas, how can I make the most of it by bringing other pet sitters into the picture? Perhaps I could host a coaching or training event of some kind?

Very quickly, I began to think about the real possibility of holding a live event.

With the idea that I may want to produce a live conference in LESS THAN 2 months away, I had a lot of thinking to do, and a lot of deciding to do.

The first major decision was whether or not I should go through with this in the first place.

I took no more than two days to sit quietly with my thoughts and think through what producing a pet sitting conference in Las Vegas would look like and if it was a real possibility of pulling off – especially with a less than two month timeline to do so.

After confidently feeling that this is something I can do an want to do, I quietly reached out to some trusted friends in our industry.

I told them of my initial plan and simply wanted to hear whether I was being crazy or not.

It turns out the idea was met with a positive reaction and I had no choice but to move forward full force with a live event for pet sitters on the way.

To say I was nervous for most of the eight week prep would be an understatement. I was not sure what the actual outcome would look like but I did know one thing for certain all along: no matter what happens, the event will be a resounding success for all involved.

Trust Your Gut at All Costs 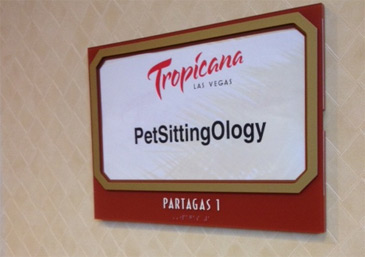 The Tropicana in Las Vegas was the perfect setting for our event.

I knew that no matter how this played out, I would be able to look back on the event with pride and confidence for the undertaking to begin with.

The pieces all came together (again, very quickly) and pet sitters booked flights and flew in a day or two before the 2-day event.

Monday morning arrived and my alarm wet off at 5:30am. I had to give myself the time to mentally, emotionally and physically prepare for the big day ahead.

At the start of the 9 o’clock hour the event officially kicked off and I was so ready and excited.

I gave a short intro talk to the room and one of the topics I hit on was the need for small business owners (all of us) to make decisions.

The ability to make decisions — in one direction or the other — is literally what separates the successful from the unsuccessful. 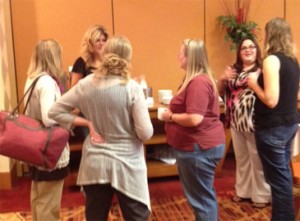 I was challenged with that ability all throughout this conference. I had to decide on things very quickly as the event came together.

Once you make a decision, the universe conspires to make it happen. —Ralph Waldo Emerson, American Poet, 1803-1882.

Making the right or wrong decision is not the point. Making the decision in the first place is.

As pet sitters, we have no less important decisions to make day to day than the ones I was forced to make leading up to the live conference. Do not let the ability to decide on something paralyze you or prevent you from moving forward.

Whether its with hiring, building your website, or firing a client, know what decisions you need to make and make one.

Now you can own the entire conference video library – over 8 hours of videos featuring 6 speakers! Click Here to view the Official Pet Sitting Live! Website for details.

You Know The Decision You Need To Make Now.

I am quite certain that at this very moment, you are sitting on at least one major decision that you need to make.

Gather all the pros and the cons of your choices and go with it.

Let us know in the comments below what decision you currently need to make, or what recent decision you’ve made (and with what success).

I Need Your Input, Please – Do You Want Pet Tech At The Conference?