This is a guest post written by Ashley Spade. 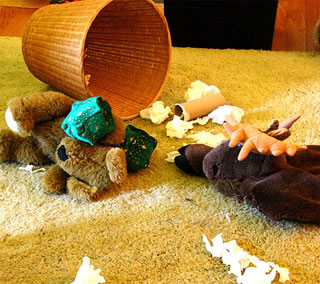 During my undergraduate years I lived in a dorm, but when law school started I decided it was time to strike out on my own and find an apartment. Accordingly, I found an apartment close to campus that was okay with pets, and I moved in with my dog, Sir Winston Pugsalot the First (Sir WP for short), just a week before classes started.

I soon discovered that money was exceptionally tight, so much so that I started looking into starting a business that would work around my class schedule. After a little brainstorming, I decided to start a pet-sitting business. I whimsically called my business Pusgalot’s Pets and started looking into getting my business up and running. After a lot of research and some trial and error, I ended up using email marketing and word of mouth.

Due to my class schedule, I pet-sat mostly in the evenings and on weekends. Since I live in a college town, I had many students as clients, and quite a few professors, all of whom traveled and visited family often enough that I was confident I’d be able to support myself and Sir WP easily. Due to the fact that I requested that I be allowed to bring Sir WP along with me, I had a few people turn down my services, but overall, my requirement was accepted and even encouraged, as the pet owners felt it would be good for their pets to have the extra company.

My first appointment was a weekend stay at my Constitutional Law professor’s house. He and his wife were celebrating their anniversary and didn’t want to worry about Bruno, their Yorkshire terrier, while they were away. They had just gotten him a week before and were uncertain how he would react to being alone. I arrived an hour before they were to depart and took copious notes about Bruno’s schedules and routines. I found my professor to be every bit as detail-oriented as he was in class, and my notes covered two-and-a-half pages by the time he and his wife departed for the weekend.

Once they were gone, I looked at the two dogs sitting there, eyeing each other, and my heart nearly burst. My Sir WP was going to have his first sleepover! As I placed Sir WP’s food dish next to Bruno’s, I envisioned taking the two of them on long walks along the winding roads of the neighborhood and watching them frolic together in the fall sunlight. So I went to the garage, where Bruno’s leash hung on a hook, and returned to the family room with anticipation.

Much to my horror, when I returned I saw that Sir WP had knocked over the trashcan by the desk and was pulling out wadded pieces of paper and shredding them. “No, Sir WP!” I called as I reached into my pocket for my clicker. I had trained Sir WP well, and he moved off when he heard the distinctive clicking. Bruno looked on quietly as I dropped to my knees and cleaned up the shredded pieces of paper. I was so intent upon my clicking and cleaning that I failed to notice that, when Sir WP left the mess, he went directly to the couch and pulled a running shoe from underneath. By the time I looked up and saw what he was about, he had savaged what looked to be an expensive shoe; when he saw me looking at him, the guilty look on his face was unmistakable.

I removed the shoe from his mouth, snapped on his and Bruno’s leashes, and was out the door within 30 seconds, lecturing Sir WP the entire way. I had never seen him misbehave like this, but I attributed his behavior to his innate curiosity and was soon able to forgive him. As the three of us walked along the hilly road, we soon came to an open meadow area, and I let the dogs run around for a little while. I stood in the shade of a maple tree with reddening leaves and watched them play…and then I watched as Sir WP mounted Bruno. “No, Sir WP!” I shouted, reaching for my clicker as I ran to separate them.

After this debacle, we headed back to Bruno’s house, and I made sure to keep them apart. Sir WP walked into the house, I had lost all patience, and locked Sir WP in the bathroom and Bruno into the spare bedroom, where he had a doggy bed. Throughout the rest of the weekend, I had to keep this arrangement, as Sir WP was relentless in his pursuit of Bruno. I took the dogs on separate walks, fed them separately, etc.

When my professor and his wife came home two days later, their house was clean and Bruno happily greeted them with a series of yips and yelps. I told my professor everything that had happened over the weekend (other than the mounting incidents), accepted his payment for services rendered, and made my way back to my apartment with Sir WP. I researched Sir WP’s behavior and learned about dominance behavior in dogs, and was able to forgive Sir WP for his indiscretion.

Nine weeks later, just as the semester was drawing to a close, my professor approached me after class with a smile. He started by thanking me again for the care I had given to Bruno, and informed me that they had decided to change his name. When I asked what they changed it to, he chuckled and replied, “Fifi.” As it turned out, he continued, Bruno was actually a female dog. I asked how he found out, and he passed me a photograph showing Bruno…I mean Fifi surrounded by a passel of puppies. I commented that they were cute, and his cryptic response was, “So I guess that makes us family, doesn’t it?”

It was at that moment that I understood Sir WP’s behavior on the weekend. My only question is, does this make me a grandma? I’m a little young for that title, but I suppose I can go with it. In the future, I plan on checking all of my prospective clients for gender before letting Sir WP frolic with them in the sunlight.

Ashley Spade, also known as Sir Winston Pugsalot the First’s favorite human, is a law student in Chicago. When she isn’t studying, she enjoys competing in 5K races, trips the the bark park, and blogging. Keep up with her adventures on twitter: @ashspade

The Top 3 Methods to Paying Your Pet Sitters [Video]

In this video, Nancy writes asking the following question: How do you pay your ICs?…

The day-to-day life of a professional pet sitter is often misunderstood. So much goes on…

The Anatomy of a Wordpress Plugin When you hear the word Wordpress, what comes to…